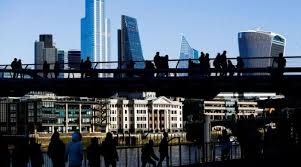 The IHS Markit/CIPS UK Services Purchasing Managers’ Index (PMI) rose to 53.9 January, a full point higher than a preliminary reading for the month and up from 50.0 in December.

It was the strongest reading since September 2018 and came in above all forecasts in a Reuters poll of economists that had pointed to a reading of 52.9.

Last week, the Bank of England said it saw signs of a post-election pick-up in growth as its policymakers voted against an immediate interest rate cut to help the lackluster economy, which slowed to a near-crawl in late 2019.

Data company IHS Markit, which produces the PMI, stuck to its view that the economy looks on track for quarterly growth of around 0.2% at the start of this year.

“January’s PMI surveys give a clear signal that the UK economy has picked up since the general election, as a diminishing headwind from political uncertainty translated into rising business and consumer spending,” IHS Markit chief business economist Chris Williamson said.

Brexit anxieties could still cloud the outlook before Dec. 31, when Britain’s new trading relationship with the European Union is due to start.

Prime Minister Boris Johnson has pitched two models for his country’s trade ties with the EU after Brexit: preferably a deal based on the EU’s accord with Canada or, failing that, the basic terms that the bloc has with Australia — with business groups opposed to the latter approach.

The services PMI’s gauge of business expectations rose to its highest level since May 2015.